We got a bit carried away with the pink at our group with Homestart Dundee this week. This sensory tray had lots of different textures to explore and it was nice to watch how the different ages of wee ones used it. Babies were just feeling the pink snow and the feathers while the toddlers were moulding cup cakes and scooping ice creams.

These trays were made using a died pink version of sensory cornflour snow. You need:

Tip your cornflour into a tray and add half a cup of water with your food colouring mixed through (this will help it to mix through the flour). Then start gradually adding your oil and mixing thoroughly as you go. This takes quite a lot of mixing, rubbing any lumps between your fingers until it’s a nice soft snow like texture. You should be able to mould it into a hard packed ball but then crumble it back up into soft crumbs again.

It is nice to leave little ones to lead the exploration because you never know what ideas they will come up with. And you can support them by playing along with any role play, “eating their icecreams” etc.

Here is our tray after the play was over! 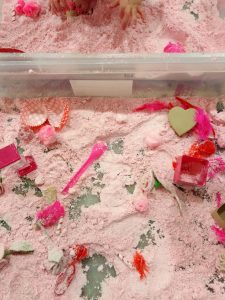 The Art at the Start team had a visit from BBC Scotland’s The Nine team.

Reporter Louise Cowie joined us for a messy creative session at DCA last week and then visited the Minime lab with her own mini me. The program aired on BBC Scotland last night. Catch it on I-Player here 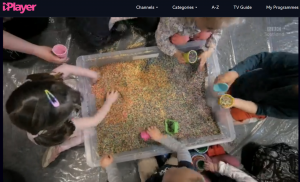 All the little ones had fun with sensory play trying rainbow rice, a dinosaur swamp of jelly and peas and some cornflake farm land. Then we tried some messy painting with shaving foam marbling and bubble printing. 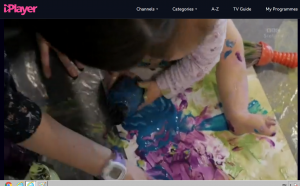 We had a great time and the little ones have all enjoyed seeing themselves on the TV today!

This is another idea from our session with parents and little ones at DCA this week. We were responding to a circle painting by David Austen that was in his Underworld exhibition at DCA.

Trays to spread paint out in 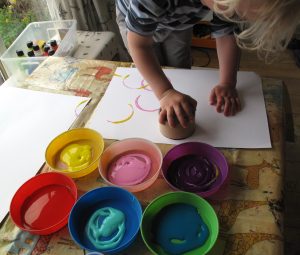 This one is very simple. Just spread out paint onto trays or plates and let little ones experiment with dipping the different objects into the paint and printing them on to the paper. You can develop this activity by using it to think about sizes – what circles will fit inside each other – and to think about colours as you layer them and make patterns. 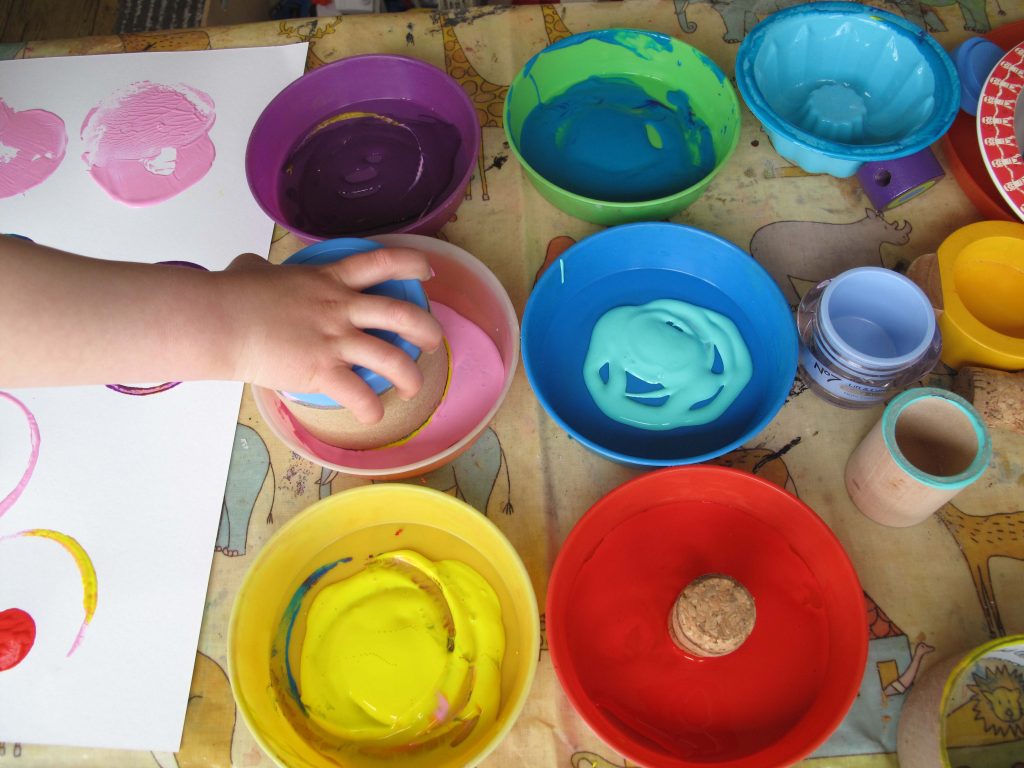 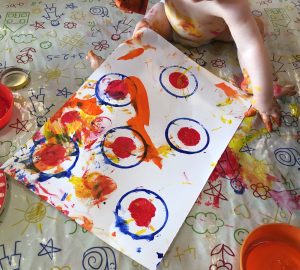 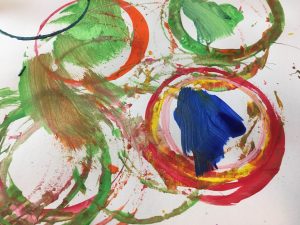 We were bubbling at DCA this week with a group of babies and toddlers and their grown ups so we thought we should post the recipe in case you want to try it at home.

Paper (nice thick paper which is good and absorbent is best. Printer type paper will rip and not take in the colour) Cover the bottom of each cup with paint and add a squirt of baby bubble bath. Top up with about twice the amount of water as paint and then mix thoroughly. You want the paint to be about a third of the way up the cup.

Then using a straw let children blow into the mixture until you get bubbles making a mound that comes out the top of the cup (if you think little ones are too small to blow and might suck instead then have a grown up do this bit). Then place a piece of paper on top of the cup and it will burst all the bubbles leaving a print. You can keep layering up different colours of bubbles in this way until you’re happy with your art work. 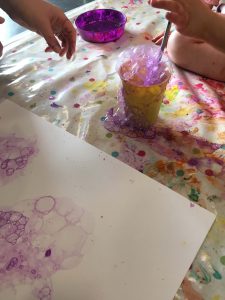 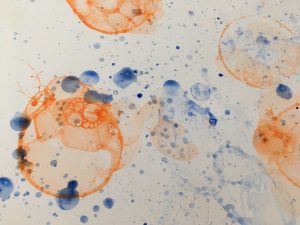 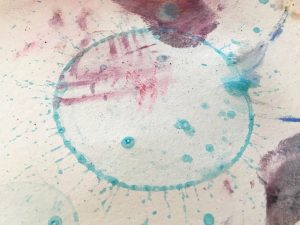 We were at the Dundee International Women’s Centre today doing sensory trays with the mums and little ones in their flourish group. Sensory trays are a nice way to let children explore different textures and use their imagination to create small worlds. It can also extend the possibilities of their existing toys, as you can see here.

We made a farm tray really easily using cornflakes as a base and wheat biscuits to make hay bails. It gave new ways to use toy tractors and diggers for moving the bails about and we added some farm animals for fun. And it didn’t matter if some of the wee ones had a taste!

This is another version of a farm based sensory tray using chocolate cheerios for a building site and some cornflour and shredded wheat on the farm. 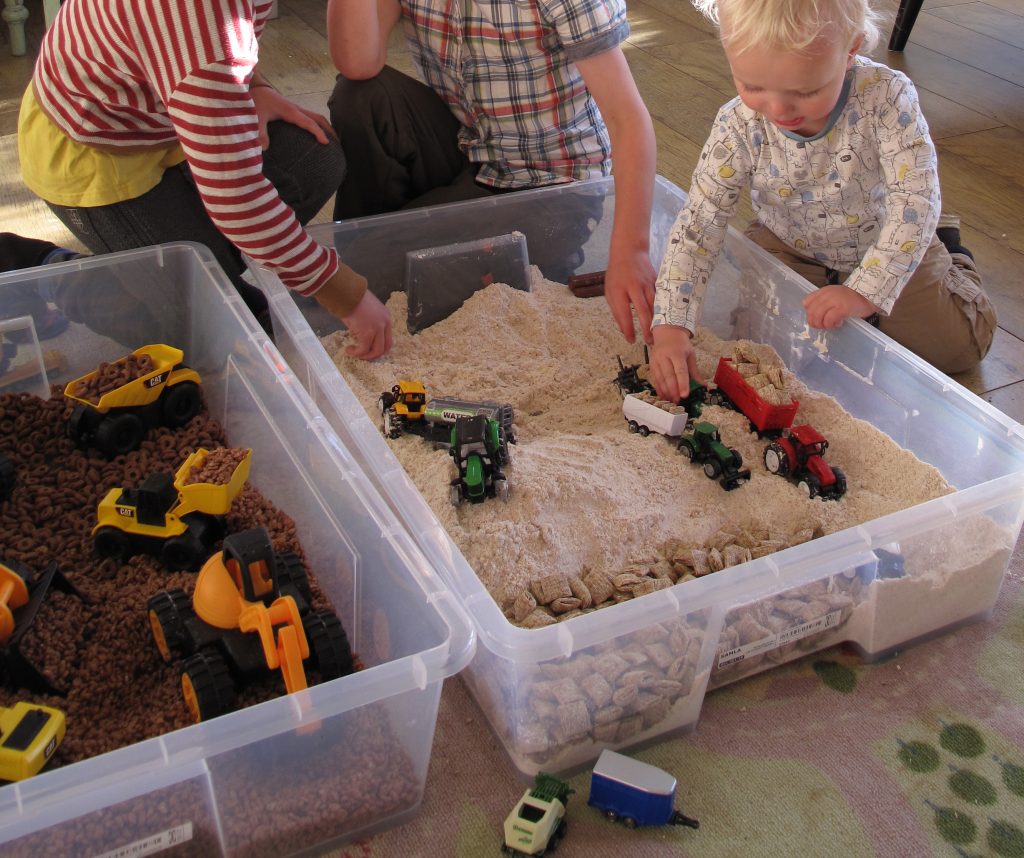 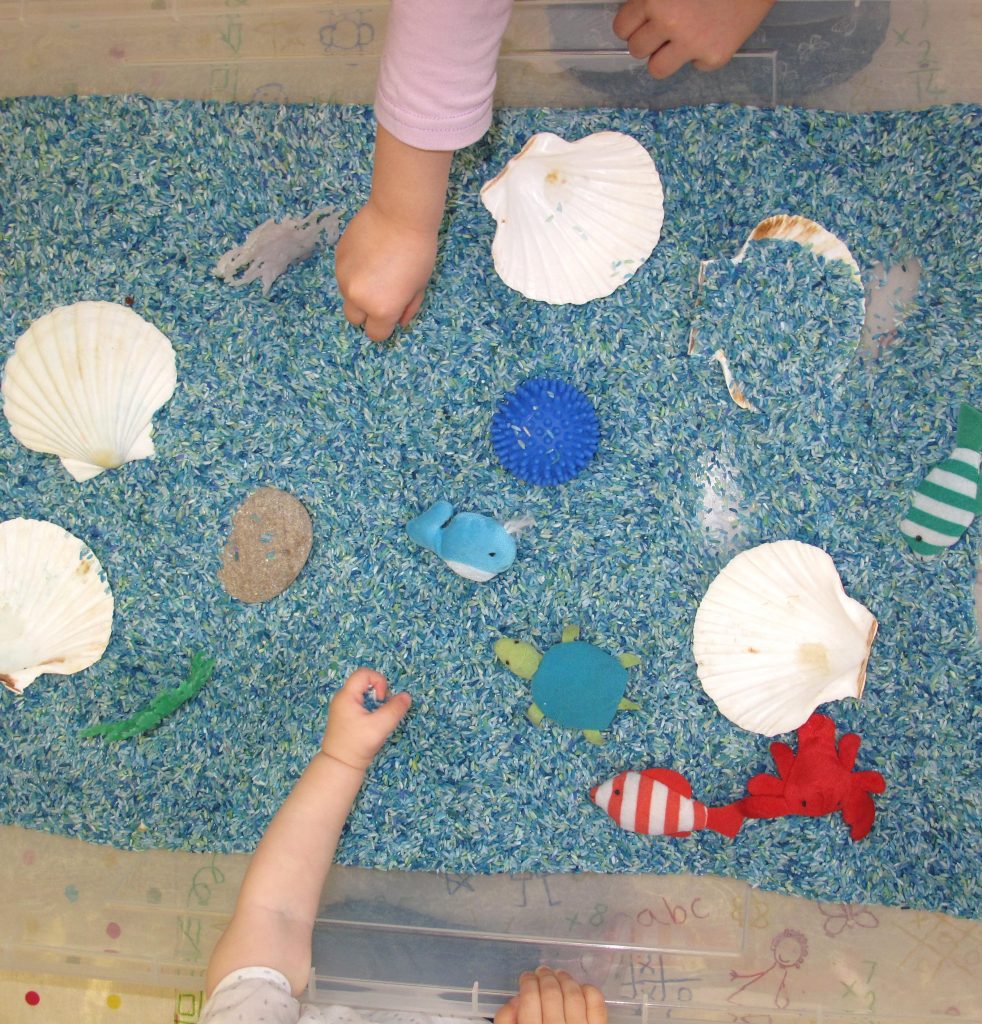 and a swampy dinosaur tray using a squishy jelly mixture made from basil seeds. You can order these seeds easily online. They start tiny and black but if you leave them in water overnight they soak it up and get a cool, squishy, frog spawn texture. If you add food colour to the water they absorb the colour too so you can colour them to your theme. They feel a bit like the water beads which you can buy but these are safe to eat and they are a bit smaller than other similar foods like tapioca pearls so there is less of a worry about choking. 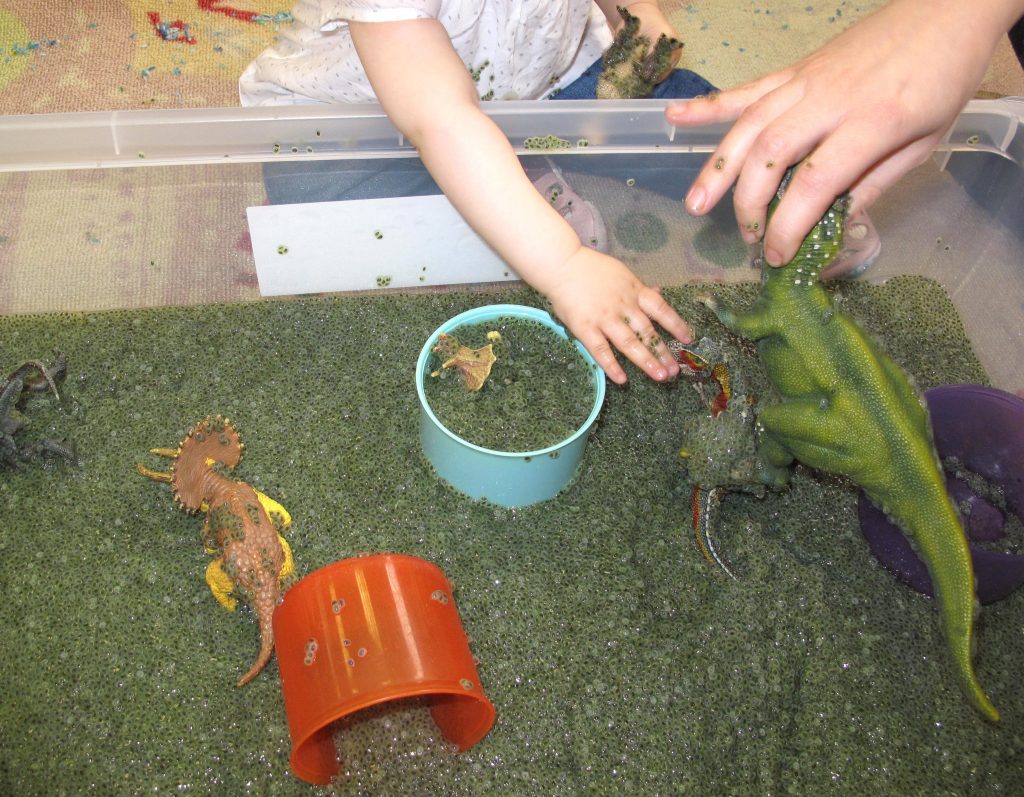 These three trays gave lots of different textures to be explored from slimy to dry and crunchy. It’s always nice to have some cups on hand when you do sensory trays so that children can start filling and pouring to extend the play when they run out of interest in the toys. These work well for a wide age range (0-9 all enjoy these in my house so far). I just use the big trays that they sell for under bed storage and then you also get a lid if you want to keep some for another day.

We are running art therapy groups for parents and their infants at DCA and at the Dundee International Women’s Centre this term. All the parents and their little ones got stuck in with painting on their first week. Here are some of their beautiful painty creations. They all definitely needed the bath afterwards, with as much paint on little people as on the paper! 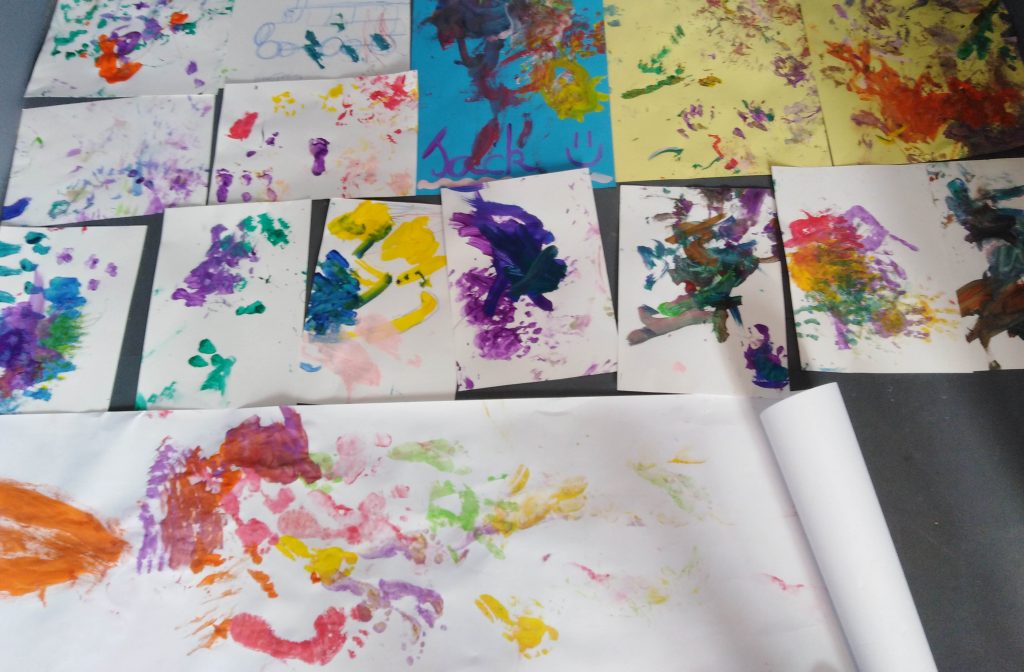 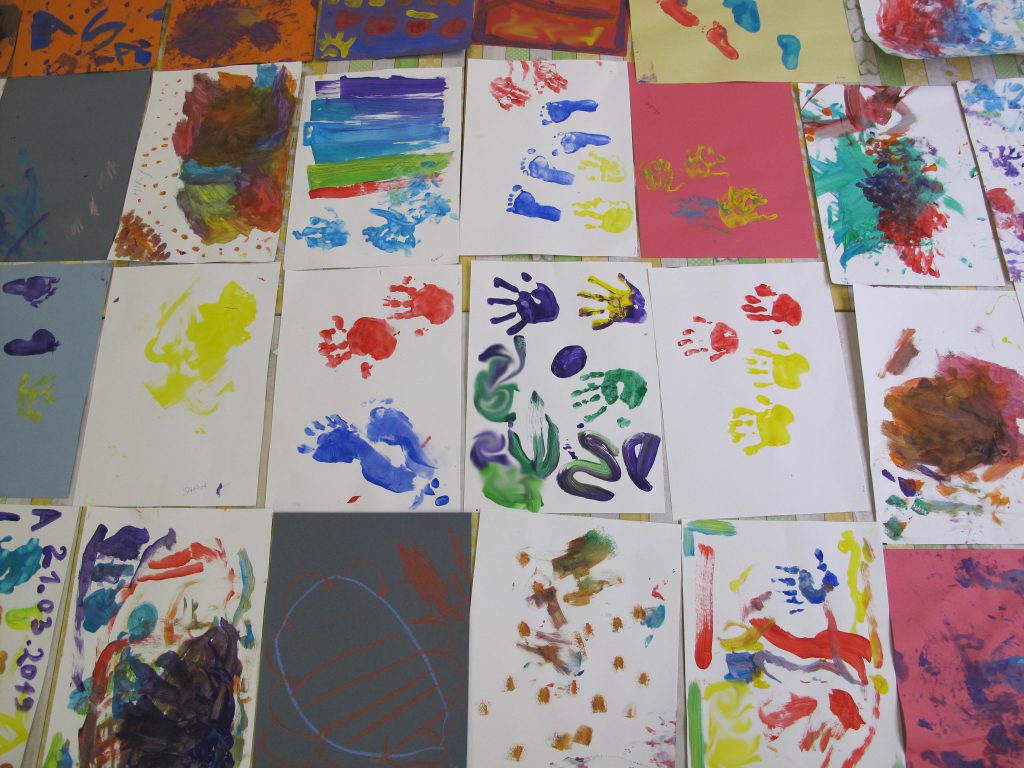 If you are interested in art therapy groups yourself and have a child under 3 then please do get in touch with the art therapist for more information. v.g.armstrong@dundee.ac.uk