What happens when we make art together? This project explores the impact of engaging with the arts on infant’s well-being, development and attachment relationships. We are looking to create an evidence base for the social consequences of art making in early childhood.

Making art together builds wonderful moments of connection between babies and their grown-ups – these moments are the key building blocks of strong relationships and self-esteem. When adults respond positively, babies learn that the ‘mark’ they make on the world will be positively received.

The project began with the development of the Create Together art therapy groups by art psychotherapist Vicky Armstrong. The groups were well received and the parents involved reported an improvement in their relationship to their infant. Looking for ways to measure changes in the infant’s experience of their relationships following their participation in the groups, Vicky approached Dr Josephine Ross and they founded Art at the Start, collaborating on further funding bids to research the art therapy groups, this time using more formalised evaluation measures and video data to look for observable changes in the kinds of interactions happening between parents and babies. Again we saw positive results with improvements to well-being and increases in the kinds of behaviours that promote positive attachments.

In the next stage of the project we began working collaboratively with Dundee Contemporary Arts in order to study the impact that the art participation has upon the social well-being of young children and how shared art experiences may help to build strong attachment relationships. We look at this from multiple perspectives; studying the impact upon families with children who attend participatory arts activities as part of the DCA activity programme, measuring the efficacy of a specific arts psychotherapy intervention which targets families with young children where the attachment relationships are considered vulnerable, and offering families at risk of low wellbeing art resources to use in their home. We also do lots of outreach to get as many 0-3s as possible making art. The project looks for details of the behavioural changes following these participatory and therapeutic arts experiences in order to pick apart what is happening when young children make art together with their carers.

The current stage of the project is focused on scaling up the Art at the Start model across new sites in Scotland. We received funding from the AHRC focused on using cultural assets to address health inequalities. We are partnering with our original DCA site as well as three new galleries – Tramway in Glasgow, Taigh Chearsabhagh on Uist and Dunfermline Carnegie Libraries and Gallery – to embed art therapists. They will run a new parent-infant art therapy service as well as developing new 0-3s audience and outreach to communities who may find galleries and services less accessible. In addition we are lucky to have developed partnerships with NHS perinatal and infant teams in Greater Glasgow and Clyde, Lothian and Highland, and with the charity Cross Reach who will also use the parent-infant group model in their work. And we are being supported in that by the National Museum of Scotland and the Fruitmarket gallery.

The quality of the loving bond between caregivers and infants in the first three years of life lays the foundations for social , emotional, and biological development. Warm, reciprocal interactions demonstrate to infants their positive influence on the social environment and build expectations of safe, supportive responses from others. These schemas lead to positive concepts of self, and encourage individuals to engage with and build relationships (Svanberg, 1998). The consequences of secure attachment can also be observed in the infants’ brain, mediating the development of neural structures in the hippocampus involved in learning, memory, and regulating stress (Schore, 2001). In short, positive attachment experiences builds the resilience central to good mental health. In keeping with this observation, there is strong evidence linking poor attachment relationships with poor life outcomes. Insecure attachment is associated with disruption in childhood cognitive and behavioural development (Belsky, 2001) and predictive of a wide variety of mental illnesses later in life (Weich et al. 2009). Crucially, the quality of early relationships are open to change (Van IJzendoorn et al., 1995). This means that attachment interventions have the potential to have an immediate and preventative impact on psychopathology. Moreover, as the key risk factor for insecure attachment is having a parent or foster parent who themselves experienced suboptimal attachment (Van IJzendoorn, 1995), targeting intervention at an early stage has the potential to improve not only the current health of the dyad, but the health of future generations.

An art psychotherapy approach is theoretically ideal for supporting early relationships because the experience of trying new materials allows the therapist to support the parent in regulating and attuning with the infant’s aims and feelings, and facilitates positive touch and sensory experiences. These mind-minded and nurturing processes are thought key to positive attachment (Van IJzendoorn et al, 1995, Bigelow et al, 2010). However, although there have been a number of published case studies of parent-infant art therapy groups (e.g. Hosea, 2006), including three studies which found an overall positive impact on self-reported maternal mental health and parent-infant attachment (Ponteri, 2001; Arroyo & Fowler, 2013; Armstrong & Howatson, 2015), these small scale studies lack the statistical and clinical power to provide a strong evidence base for art therapy intervention, and there has been only limited discussion of how art making might facilitate change (Ball 2002, Isserow 2008). Further, no previous art therapy study accounted for likely moderators of attachment intervention, such as socio-economic status, parent’s attachment history and mental health, the child’s age, or the fit between parent’s and child’s temperament (Van IJzendoorn et al., 1995). Thus, a key objective of our project is to strengthen the scientific evidence base for art based attachment intervention for groups at risk of attachment difficulties. Our methods allow for the first time, scientific assessment of the extent to which art therapy is an effective attachment intervention, for whom, and why. 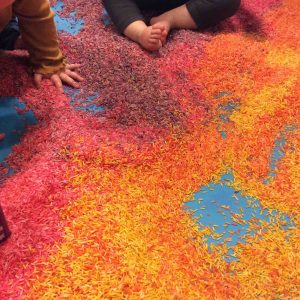 Beyond the specialist field of psychotherapy there is a growing interest in how arts in general can impact upon wellbeing (Clift 2012). A number of participatory arts programmes working with the mothers of young children show promise in improving attachments and psychological development (South London Gallery, 2015) and there are attempts to make frameworks for evaluations in this area (Daykin et al 2014, Fancourt & Joss, 2014, Public Health England 2016). However, discussion of specific mechanisms for art facilitated change is again limited. Indeed the All-Party Parliamentary Group on Arts, Health and Wellbeing report (2017) specifically recommends that research councils should fund interdisciplinary work that evidences the link between arts and well-being. In recognition of this, a wider objective of project is to explore the social functions and consequences of art making in community settings. To provide this broader context, the project is embedded within Dundee Contemporary Arts (DCA), an internationally renowned centre for contemporary arts which aims to enrich people’s lives through art, culture and creativity.