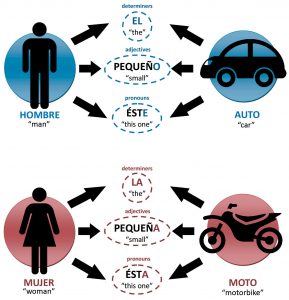 While my work on Finding your Words investigates the processes behind the selection of content words, producing full sentences involves a lot more than just stringing words together. Grammatical words and inflections must be inserted at the right point in a sentence and must have the correct form for the words they are associated with. Grammatical words and inflections ensure you say ‘an apple’ and not ‘a apple’. They also ensure we have agreement between articles, adjectives and nouns in gender-marked languages, such as the Spanish example on the right. To investigate how grammatical information is stored and retrieved, I use priming methods and the picture-word interference paradigm.

When formulating sentences, speakers often reuse the constituent structure of recently encountered sentences, the so-called structural persistence effect. Results from the structural priming paradigm have been taken as evidence against strong lexical involvement in sentence production. Rather, some recent models of sentence production view the formulation process as an interaction between event structure and general syntactic constraints, rather than more subtle verb-specific constraints. My research seeks to provide evidence for lexically-driven syntactic processes in production as well as uncovering the scope of the persistence phenomenon.

This research project, which spans over a decade, has been enriched by a host of collaborations with researchers from around the globe. Most recently, I’ve worked with Dr. Sandie Cleland from the University of Aberdeen on a project we concocted over dinner and drew up on a napkin!