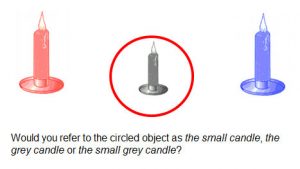 To bridge the gap between these two related research areas, we have edited three special journal issues on reference production (Van Deemter, Krahmer, Gatt, & Van Gompel, 2016, Gatt, Krahmer, Van Deemter, & Van Gompel, 2014; Van Deemter, Gatt, Van Gompel, & Krahmer, 2012). In our own experiments, we have conducted a series of experiments to test whether computational models of reference generation can be used as psychologically plausible models of reference production (e.g., Gatt, Krahmer, Van Deemter, & Van Gompel, 2016). We are currently also developing our own model, PRO, which is a quantitative computational model that aims to explain under what conditions speakers overspecify, that is, when they give more information than necessary for the addressee to uniquely identify the referent of the referring expression.