In the lab, physical performance effects are demonstrated in adults by having them perform a simple action (e.g. touching their head), read about or imagine the action, or passively view someone else perform the action. Adults tend to show better memory for actions they have performed relative to those processed in other ways. This is known as the self-performed task effect.

In ‘real’ life, it seems likely that a combination of self-reference and self-performed task effects contribute to the development of autobiographical memory (expressible memories of personally experienced events). 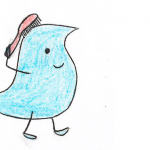 It is relatively easy to adapt the self-performed task paradigm for children (Ross et al, 2011). Although children can’t read action statements, they can readily interpret (and later be asked to recognise or recall) action pictures. In our study, we ask children either to perform an action modelled by a neutral actor (some readers may recognise the famous ‘wug‘ in a new guise), or watch the researcher perform the action.

By comparing their memory for self-performed versus other-performed actions, we can determine when the enactment effect develops. Although we don’t think its necessary to have a self-concept for the first enactment effects to develop, we are keen to explore how the self-performed task effect might integrate with the self-system and autobiographical memory later in development.