Research evidence shows that young infants can form memories. Infants show delayed imitation of other’s actions, can find objects after a delay, and once verbal, can produce reports of events experienced up to 1 year previous. However, as adults, we are unlikely to remember experiencing events prior to 2 years, and our memories of early life are limited in both quantity and quality. Several theories exist to explain this ‘infantile amnesia’. 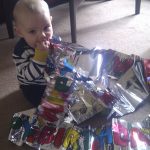 Young infants can make memories, but as adults, our memory for early life events is poor

One intuitive theory is that until memories can be filed as part of an elaborated and organised self-concept, they are difficult to either store effectively in the long term and/or retrieve (see Howe & Courage, 1993).  By this account, it is not until the self-concept develops at around 2 years that memories of ‘me’ are likely to be formed. Retrospective reports suggest 2 years as the earliest onset for expressible autobiographical memories, with 3 or 4 years as the average age of the first memory, and relatively few memories existing prior to the age of 8 years.  This developmental pattern for autobiographical memory fits with the idea that there may be a gradual growth in the self-concept which impacts on the depth of processing afforded by self-referent processing. To explore this idea, our project aims to determine if there is an association between the magnitude of self-memory effects, growth in the self-concept, and the narratives that children are able to provide about events they have experienced.

To measure autobiographical memories we ask children what they can remember about three events in their past a) their first day of nursery/school b) their last birthday and c) their memories of the first time they met the researcher (this allows us to assess memory for a relatively recent event, for which the researcher can assess accuracy).