DOLFIN is a research and know-how platform designed to support and strengthen the activities of the two existing natural resources centres (CEPMLP and Centre for Water Law, Policy and Science) and other departments of the University of Dundee, and to draw upon their expertise as well as external sources in a multi-disciplinary fashion by focusing on a field of study lying at the intersection of geoscience, international law and international relations, namely, the Law of the Sea, especially maritime boundary delimitation.

Fewer than half of the 640 or so potential maritime boundaries in the world have been agreed. The complex process of agreeing and fixing boundaries or making provisional arrangements can be time-consuming and expensive but once agreed can significantly contribute to the economic wealth of the affected countries. Disputes over maritime boundaries, some involving lakes as opposed to seas, regularly flare up around the world and sometimes result in armed skirmishes. Lake Countries (at present nine major lakes in Africa have oil and gas blocks issued and/or being issued) and Coastal States with competing claims to maritime areas routinely grant oil and gas concessions in disputed waters without the investors being fully aware of the underlying inter-State dispute. Indeed, maritime boundary disputes form a misunderstood and frequently overlooked area of investment risk management in the energy sector.

The creation of maritime boundaries involves the use of geology, oceanography, technology, money, law, history, politics and diplomacy. The modern Law of the Sea (LOS), as codified in the 1982 United Nations Convention on the Law of the Sea (UNCLOS), and the determination of maritime boundaries and related matters of interest to more than 160 Coastal States and the energy, mining, fishing and telecommunications industries involve a mixture of law, science and diplomacy. This calls for a multi-disciplinary approach.

UNCLOS, which has been ratified by 166 States and the European Union, is not just a set of principles but establishes legally binding obligations for each Party. States that have ratified UNCLOS are entitled to claim all natural resource rights to the water and ocean floor up to 200 nautical miles from their coastline and in exceptional cases even beyond that distance. Technological advances in deepwater drilling and melting ice caps are associated with claims for an extended continental shelf (ECS) by the Coastal States involved. As of June 2015, 100 individual ECS claims had been formally deposited under UNCLOS by 81 countries worldwide (74 Full Submissions and 26 Preliminary Submissions), with submissions by additional countries possibly still to come. The present ECS maritime space, i.e., 200 nautical miles to “computed” geological ECS as claimed in these 100 submissions, covers approximately 34.6 million square kilometres globally. 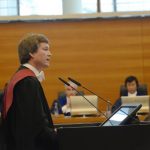 In certain geographical settings, the rights set forth in UNCLOS can result in overlapping claims and boundary disputes which the disputing States are under a legal obligation to resolve in accordance with international law. Approximately four-fifths of the world’s known oil and gas reserves lies in contested regions. Of the 640 or so potential maritime boundaries in the world, only some 275 are signed or in force — with 362 classified as “un-resolved and/or in-dispute,” meaning nearly 57 percent of all maritime boundaries remain “un-resolved.” The percentage of unresolved maritime boundaries is particularly high in Africa and Asia. In Africa alone, seven land-locked countries (Burundi, Ethiopia, Malawi, Rwanda, Uganda, Zambia, Zimbabwe) face un-delimited lake boundaries.

Lake Countries and Coastal States are increasingly turning to international courts and tribunals, both standing bodies and ad hoc tribunals, for resolving their maritime boundary disputes. Since the late 1960s, more than 20 rulings by different tribunals have shaped the maritime boundary “jurisprudence.” Provisional arrangements in the form of joint development of disputed zones are also on the rise. Such disputes and arrangements call for the application of legal and technological know-how and expertise which is often lacking within the countries and industries involved. Thus, know-how concerning international maritime boundaries, particularly the technical geo-scientific aspects and the principles emerging from the evolving jurisprudence, has never been more relevant than it is today, where the stakes for Lake Countries and Coastal States, especially developing countries, and their concessionaires are so high, with the outcome affecting a country’s prospects for economic development as well as multi-billion dollar investments by the energy industry. 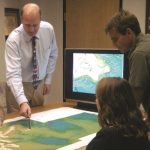 DOLFIN is supported by a special module entitled “Ocean and Lake Boundary Disputes: (E)merging Law and Science” featuring simulation exercises and applying law-of-the-sea software based on real-world situations, to be offered by DOLFIN’s Directors.‌

Robert van de Poll (Canada) is an internationally renowned geologist and engineer (geodesist) who has personally trained and worked with many of the Commissioners serving on the Commission on the Limits of the Continental Shelf (CLCS), the UNCLOS body charged with reviewing claims to continental shelves extending beyond 200 nautical miles from a State’s coastline. He has conducted over 1400+ customized studies, regional seminars, workshops and hands-on training sessions (for Governments and national and international oil companies) relating to 138 of the 162 Coastal States that fall under his Global Territory for Fugro Group Worldwide. He designed, created and developed the CARIS LOTS (Law of the Sea) software for the United Nations and maintains a truly unique state-of-the-art database, the most complete global assemblage of relevant digital Law of the Sea data of its kind concerning A to Z Law of the Sea (all numbers reflected on this Web page are derived from the Fugro database (December 2016)). Mr. Van de Poll also teaches in the annual course offered by the IMO International Maritime Law Institute (IMLI) at the University of Malta.